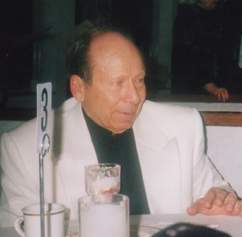 Carter Lovisone danced Jitterbug and ballroom from an early age, and taught in Denver, CO. His love of dancing and legacy was passed on through his instruction and all his students “dance one for me” in honor of him.

Fun Fact:
“You better think twice about it (starting west coast swing) before you start it because it’s going to take over your entire life. It’s like a disease, and the only cure is when you die.” – famous Carter quote

Carter Lovisone grew up in Denver, Colorado. When he was seven years old, he started taking Jitterbug (and later Ballroom) lessons with one of his father’s employees who taught ballroom dancing on the side. Carter was paired with his instructor’s seven year old niece Maria and they soon started dancing at shows and exhibitions in the local area, often to a standing ovation. When the audience threw money at them, Carter would go to the candy store for the biggest bag of malted milk balls he could buy. Little did he realize that his lifelong dance career was about to begin.

Carter’s family lived close to the Rainbow Bread Bakery and there was a beautiful ballroom on the top floor of the building. The company sponsored a public dance for the blind twice a week. An uncle of Carter’s mother loved ballroom dancing and he was blind, so Carter would walk the elderly uncle to the ballroom and ask different ladies to dance with him. With each dance, Carter stayed close by, helping to guide them through their moves without running into walls and other people. He made sure his uncle danced with every lady in the ballroom. This was 1938 – the beginning of Carter’s “pairing-up” people to dance.

Years later, Carter opened his own dance studio and discovered that most of his students were single. So, during class he rotated the dancers, giving every gentleman the opportunity to meet and dance with every lady. Carter’s favorite saying was, “You never know who you might meet in a dance class.”

Several top dancers and instructors trained with Carter Lovisone: Mike and Amber Cross and Wayne Bott. Wayne recalls, “When living in Denver, I was lucky enough to have discovered Carter. Carter gave me a fantastic and unique West Coast Swing foundation. He took me under his wing and graciously shared his dance knowledge. These were good times. My life of dance began with Carter’s love of dance.”

Carter was unfortunately crippled when a truck pushed a concrete wall over on him, breaking his back and leaving him in a coma for eleven weeks. After his recovery, he had five hip replacements and numerous operations. He doesn’t dance much anymore, but his students have all heard him say, “Do me a favor the next time you go dancing – dance one for me.” We’ll do that for you, Carter. 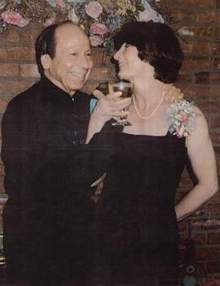 The dance business has been very good to me. I never once thought of it as a job. If one has to do something for a living, it is great to be able to do something in life that is also one’s passion. I have been very fortunate to have been surrounded by very talented people that have made it possible for me to have a degree of success.