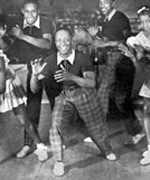 “Shorty” George Snowden (July 4, 1904 – May 1982), known for his comically intricate footwork, reigned as the top dancer n the Savoy Ballroom (with the title, “King of the Savoy”) in Harlem from its opening in 1927 into the early 30’s, when he formed the first professional Lindy Hop troupe, the Shorty Snowden Dancers.

“Shorty” George Snowden (July 4, 1904 – May 1982), known for his comically intricate footwork, reigned as the top dancer n the Savoy Ballroom (with the title, “King of the Savoy”) in Harlem from its opening in 1927 into the early 30’s, when he formed the first professional Lindy Hop troupe, the Shorty Snowden Dancers. They performed with the Paul Whiteman Orchestra at the Paradise Club downtown through most of the thirties.

He is popularly credited with coining the name “Lindy Hop”. As the story goes, there was a charity dance-marathon in New York City in 1928, On July 4,the 18th (!) day of a dance marathon at the Marathon Casino, the NYC Board Of Health finally closed down the event. Four of the original 80 couples were left standing. Savoy star “Shorty” George Snowden and his partner, Mattie Prunell,  shared the prize with the other three couples.

Earlier, with the event in full swing, people could post a small cash prize with the MC for a brief mini-contest among the survivors. This was the backdrop for Shorty’s spontaneous throw-out breakaway and flash footwork improv, capturing media attention. “What are you doing with your feet?” asked the Fox Movie Tone News interviewer. “The Lindy (Hop?),” replied Shorty. (Charles A. Lindbergh had recently “hopped” the Atlantic: over 1-1/2 years prior, landing on May 21, 1927.) (Some have challenged the authenticity of the popular story about Short George naming the Lindy Hop. When asked about this, Frankie Manning has said, “All I can say is that I heard the story from Shorty George himself. The other fellas from that time were standing around listening and they didn’t say ‘Aw, come on Shorty, quit the BS’ — which they would have said if it wasn’t true.”.)

Shorty is often credited with inventing Lindy.  The interviewer queried about footwork, but Shorty applied the term LINDY to the breakaway and improv idea. Interviewed decades later, Shorty didn’t remember exactly what footwork he did, except that it was fancy. Instead, he focused on the breakaway and improv idea as LINDY HOP. Since this was already part of the ‘Texas Tommy‘, with at least a 15 year pre-history, So, some sources state that Shorty didn’t invent it. He merely focused attention upon it. Later, it became a core move (swing-out) in the dance he named. Lindy Hop quickly encompassed the huge repertoire of its pre-history jazz dances and moves; then its’ repertoire grew like crazy.

Although he was barely five feet tall, Snowden made his height an asset rather than a liability. With comic genius, he parodied himself in his signature “Shorty George” step, in which his bent his knees, swinging from side to side, exaggerating his closeness to the ground.

Shorty’s partner, Big Bea, towered over him. They would often out-dance other couples in dance competitions of the day, and they often ended their routines in a comic move (using his diminutive height for comic effect) in which she carried him off the dance floor on her back. Frankie Manning says that this move inspired him to create his first air step, in which his partner started out on his back and then she flipped over his head and landed on the ground. George and Big Bea danced in two Bill Robinson touring productions. According to Mura Dehn, who arrived on the scene in 1930, Big Bea who was “…. twice his size, would throw him up in the air, down on the floor, pick him up and throw him down again, whilst Shorty, seemingly unaware, would struggle to complete his steps, fidgeting in her arms in the air.”

Snowden became an unequalled Lindy maestro in its basic social, competitive and performance modes. He exploited the unique character of this dance that makes it as riveting to watch in social dance settings as on stage when danced well. Dehn asserted Snowden’s ” …. routines became Savoy classics; his spur of the moment innovations seemed inexhaustible. This little man held sway over the roughest crowds, commanding the respect and attention due a master.” At the center of this new dance excitement Snowden won “national” Lindy Hop championships, with different partners, at the Roseland Ballroom in 1930 and the Savoy Ballroom in 1931.

Ironically, Shorty was defeated by Manning in a major competition when Manning introducted this first air step in 1935. Manning replaced Snowden as reigning king of the Savoy. Manning remembers his first idol and sometime competitor at the Savoy this way: “Shorty was a great comic dancer who knew his art well, like Jack Benny on violin and Victor Borge on piano.  He brought comical moves to Lindy Hop and intricacies of footwork.”

He appears in the film After Seben (1929), a 1928 film short hailed as the first visual recording of Lindy Hop,  in which he performs the famous breakaway, a variation on the Charleston. He can also be seen in the film Ask Uncle Sol (1937), dancing with  Big Bea. He formed and led the first professional Lindy Hop dance troupe, the Shorty Snowden Dancers. Unlike later Lindy Hop performance groups such Whitey’s Lindy Hoppers, the Shorty Snowden Dancers performed as individual couples, as if dancing in a contest or challenge dance. In 1935 Shorty and Big Bea appeared in an Eddie Cantor film and in the following year The Amsterdam News was still describing Snowden as “King of the Savoy.” In 1937 they were a major success in the Cotton Club under the direction of Leonard Reed.  With his partner Big Bea, Shorty George was generally recognized as the best dancer at the Savoy Ballroom until he was unseated by Frankie Manning and Frieda Washington in a dance contest in 1935 in which Frankie introduced the first airstep in Lindy Hop.