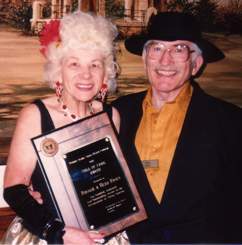 Herb and Rosalie Rosen were “The Dynamic Duo” of the swing dance world. They generously opened their hearts and home for many dancers, helping to support the dance and dancers over many, many years.

Performed dance on TV: Eye on L.A., Two on the Town, and Channel 28

Served on the Board for the L.A. Swing Dance Club

Founders of the United Citizens Committee of America Inc. (UCCA), and the Celebrity Dance and Drama Club (CDDC), serving on the Board of Directors for both

1982 – Received a beautiful award from the Swing dancers who used their ballroom. It read, “With love and gratitude and in deep appreciation for promoting the art of Swing Dancing”

1985 – Certificate of Recognition presented by the San Diego Swing Dance Club, “In appreciation of devoted and valuable services”

1987 – Certificate of Recognition presented by the Rebels Dance Club, for being “A legend in the art of Swing dancing, teaching, and promotion”

1986-1987 – Recognized by the L.A. Swing Dance Club Board of Directors: “As a token of our appreciation for your efforts toward our anniversary ad book. Your display of ability and club interest will long be remembered”

1989 – Received the UCCA Humanitarian Award for raising over $1,000 and two truckloads of clothing donated to feed the homeless at Easter

1991 – Inducted into the World Swing Dance Council Hall of Fame

Herb and Rosalie Rosen have been known throughout the West Coast Swing dance community as “The Dynamic Duo” and “Mom and Dad” of Swing dancing for many years. Their passion for dance and generosity to everyone is an inspiring story filled with love, kindness, consideration, and dedication.

Rosalie started teaching Tap and Swing at various studios back in 1941. She met Herb in March 1948, at the Bill Williams Dance Studio and the “Dynamic Duo” was born. They married on June 30, 1949 and honeymooned on Catalina Island where they entered a Jitterbug contest and won first place. This was the beginning of a forty-year success record in local and national Swing competitions – last competing in 1989.

Over the years, they attended many clubs like the “Casino Gardens” and the famous “Palladium.” They recall going out almost every night and then getting up early for work. Eventually, they bought a home and converted it into a party house with a beautiful thirty-foot ballroom they named the “Rosenland Ballroom.” They threw fabulous dance parties and opened their ballroom to many dance teachers, free of charge.

They have been continually involved in the promotion of Swing since the day they met. Rosalie continued to teach Swing, Tap, Ballroom, and drama at the Shenandoah St. School for the L.A. Board of Education and the Hollywood Professional School. Rosalie also organized Swing dancing shows for several Hospitals.

Herb and Rosalie danced professionally at the “Casa Manna,” “Meadowbrook Gardens,” “Zuccas Opera House,” and the “Paris Inn.” They have judged many Swing contests over the years. They danced on several T.V. shows: “Eye on L.A.”, “Two on the Town”, and “Channel 28.” When the July 1988 issue of the Seniors Life Newspaper ran their picture with the headline, “Back to Swing,” they ended up introducing over 100 people to swing. Dance Action Magazine presented an article about them that inspired young dancers to start The Next Generation Swing Dance Club in the San Francisco Bay area.

Herb and Rosalie Rosen’s efforts to promote Swing have always been non-profit. Everything they’ve done, including spending their own money, is purely out of love for the dance and the dancers. They help raise money for dance events; they welcome out-of-town dancers to stay at their home; they help dancers with car troubles; they treat everyone like family – the list seems endless.

On February 1990, UCCA sponsored a Swing Dance Ball at the “Alpine Village” and presented their annual “Build a Better America” award to Senator Quentin Kopp for authoring Senate Bill 2460, making West Coast Swing our State Dance. Rosalie played an important part in this achievement, for when Senator Roberti refused to pass it out of his committee, Walter Harman asked her to see what she could do. She knew the right people, which helped make the bill a success.