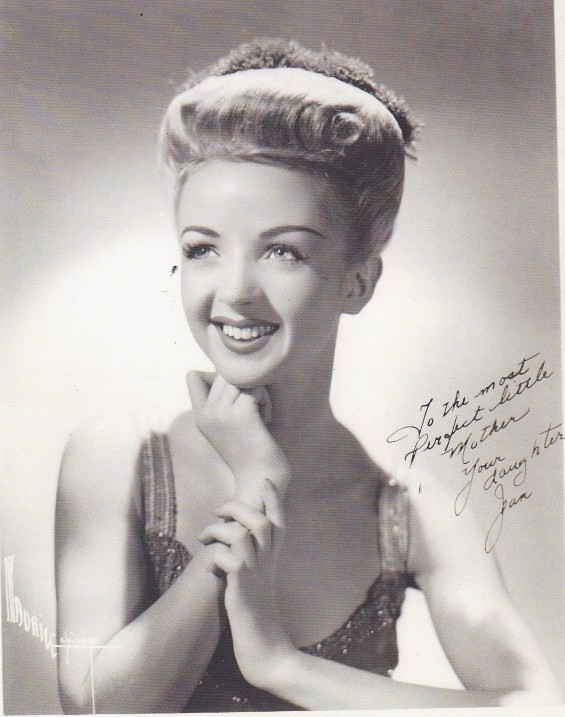 As a teenager in the 1940’s Jean and her brothers, Bob and & Ray, would invite friends over to their living-room and practice the popular dance of their generation, the Lindy Hop.  Jean and Ray got so good together that they decided to enter an area-wide Jitterbug contest in Santa Maria, winning out over a total of 500 dancers.

As a teenager in the 1940’s Jean and her brothers, Bob and & Ray, would invite friends over to their living-room and practice the popular dance of their generation, the Lindy Hop.  Jean and Ray got so good together that they decided to enter an area-wide Jitterbug contest in Santa Maria, winning out over a total of 500 dancers.

The Phelps family moved to Los Angeles in 1942, which allowed Jean and her brothers the opportunity to dance at the LA hotspots. In 1943 Jean entered a contest at American Legion Stadium in Hollywood, where the prize was a Screen Actor’s Guild membership card and a dance cameo in the movie
“Swing Fever”, starring Kay Kyser and Marilyn Maxwell. Jean won the contest, her SAG card, and the opportunity to dance with Lennie Smith & Don Gallager in the feature-length movie.

After the success of Swing Fever, Jean’s career took off and she went on to dance in several movies: 20th Century Fox’s “Swingin’ On a Tea Garden Gate” starring Peter Lawford, 1943’s MGM’s “Jive Junction”, “The Horn Blows at Midnight” (1945), starring Jack Benny. But one of her most popular films for Lindy Hoppers around the world is the 1944 short film “Groovie Movie“, as it’s a great study of the early years of the Lindy Hop.

Outside of starring in movies Jean and her brother Ray entered many dance contests in the Hollywood and Los Angeles areas. In 1946, Jean danced in the chorus line at El Rancho Vegas Hotel, working with choreographer Nick Castle for six months.

Jean’s fate was about to take another positive turn when famous ballroom dancer, Frank Veloz, was in need of a partner, after his regular partner & wife, Yolanda Veloz, retired. Jean became Frank’s new dance partner, performing exhibition ballroom dancing and appearing in a two-week engagement at the St. Francis Hotel in San Francisco. In 1950, “The Frank Veloz Show” aired and ran for 5 years. Jean and Frank did exhibitions of tango, waltz, rhumba, samba, swing and foxtrot, along with teaching these dances on live TV. They interviewed many well-known stars including Liberace, incorporating these appearances into the show.  Jean and Frank eventually were married in 1963 (he had divorced his wife Yolanda in the 50’s) and they remained a happy dancing couple until his death in 1981 from cancer. Jean stopped dancing until 1992.

In 1992 Jean was approached by Rudy Linan, a swing dancer from Vegas, who was working on a swing documentary and encouraged Jean to start dancing again. After she put her dancing shoes back on, the Lindy Hop/Swing Dance world took notice and she was asked to participate in dance events from coast to coast, year after year. In 2000, all surviving members of Groovie Movie appeared together again for the first time since the 1940s; and in 2004, the group was together again to participate in activities surrounding the dedication of the World War II Memorial on the National Mall in Washington, DC., performing in front of hundreds of people.

In 1996, Jean Veloz was inducted into the California Swing Dance Hall of Fame, as a Golden Star.