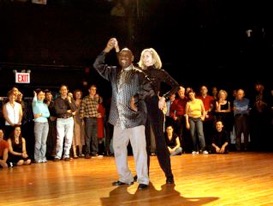 George Lloyd was born in Miami in 1921, where he learned to dance at the two local dance halls for blacks. He visited NYC in 1940 before entering the service in 1942. During the war, he danced in USO clubs in France and Germany; and won two contests in France.

George Lloyd was born in Miami in 1921, where he learned to dance at

the two local dance halls for blacks. He visited NYC in 1940 before entering the service in 1942. During the war, he danced in USO clubs in France and Germany; and won two contests in France.

He returned to NYC and choreographed USO shows. After demobilization, he began hanging out at the Savoy and Lenox in Harlem, where Lindy was still ‘the dance’, and joined a group of social dancers there called The 400 Club. “They were the best dancers around, really. They’d form a circle in front of the bandstand, and one couple at a time would enter, “he said. “You had to be really good to get in that circle.” He danced at the Savoy until it closed in 1958.

He became a regular partner with Barbara Bates, another 400 Club member. They entered the

Harvest Moon Ball several years, without success; but over 25years later, he was dancing with Margaret Batriuchok, and she convinced him to enter it again, and they won. That 1983 Harvest Moon Ball was the last one with a Lindy contest.

Two style of Lindy Hop grew out of the ‘30’s and ‘40’s – one oriented to performance and one oriented to social dancing. George is one of the finest dancers of the social Lindy, being known for an especially keen sense of rhythm and balance; and it’s been written, “What is special about George’s dance is his fluidity and timing. Instead of picking his feet up, he keeps the sole of his foot very close to the floor. He also has very good balance, and the result is that he looks like he’s sliding on glass.” He danced by feeling the music, not intellectualizing, thinking of step or routines, or even planning ahead. He just stayed right on the music and his feelings at the time.

Although George never appeared in a show or movie, has never taught formally (and had no desire to do so), he was considered one of the most creative and original swing dancers around. He had sparkle and pizzazz, when putting energy into a fast number he never lost his cool, balance or grace. Unfortunately, many weren’t privileged enough to see all this because his failing health in later years prohibited such movement. He had hurt his back in 1969, had a disk operation; and in the 1970’s broke his arm. After that he gave up aerials and concentrated on sliding, which he argued let the floor do the work for him. 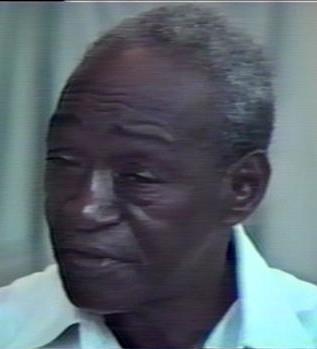